Many strange things are permeating our financial markets even as hopes of a “return to normal” are still the goal – at least on surface level for reasonable participants. Of course, the more control of the financial world taken by the Federal Reserve, the less likely a return to normal will be a smooth transition – honestly it may not ever actually be achieved. We have repeatedly discussed our distrust of the methodology of Fed (and other central bank) asset purchases within the world’s financial markets. How would we ever get back to normal in the financial world with an accumulation of assets that looks like this? 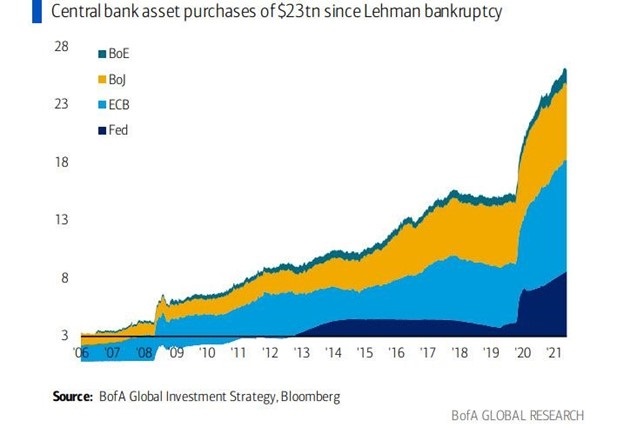 The vast majority of what you see on this chart are the bonds (sovereign and corporate) that the world’s central banks have accumulated. Everyone who reads this post on a regular basis knows that when bond prices go up, interest rates go down. So, the end result of all these purchases from bankers using money conjured out of thin air is artificially low interest rates- even way out the duration curve as the banks have set short term rates at essentially zero.

Interest rates are so low, that private investors are now going way out the risk curve for yield. That has distorted historical norms from the perspective of the price of ALL TYPES of assets and the ratios between them. In a recent post, we discussed how an astonishing 90% of JUNK BONDS were yielding a negative rate when taking into consideration inflation https://andorracapital.com/central-bank-liquidity/

That is a historical norm that is way out of whack. Others include things such as PE ratios of stocks (that everyone talks about) or the total stock market capitalization vs GDP, total corporate debt to GDP, US government debt to GDP and so on. The point is that our financial world is levered up and much of the historical analysis is getting thrown out the window when attempting to position resources.

In addition to many financial indicators that point to a volatile new world, worriers on the fundamental side have plenty to worry about as well. The biggest headline today is about the supply chain issues causing shipping containers to stack up outside of Long Beach, CA and other ports. We can add the energy supply problem – largely in Europe right now – and of course, the real estate market teetering on disaster in China. The corona virus isn’t gone, Australia is struggling while coming out of total lockdown and some provinces in China are showing a whole new surge in virus cases. In addition to that, Inflation is on everyone’s mind and is a serious concern. Our Treasury Secretary is talking about it, but our Federal Reserve Chair is the one that should be. Finally, almost like a cherry on top of the world’s geopolitical sundae is the thought that China may invade Taiwan in the near future.

When so many worries are hitting the headlines of our media – generally it means we are climbing a “wall of worry” in the stock market and the high isn’t in yet. That is likely where we are today. We are now sounding like a broken record – continually outlining serious potential problems in our socio-economic world – but ending with the thought that doom is not imminent…

So next week we will talk about some of the surprisingly good things that are going on (US corporate deleveraging as an example) so that it makes sense to then contemplate when we might see a topping out of asset prices.