The Strength of the U.S. Dollar

Contrary to popular belief the U.S. dollar is not losing its world reserve currency status. The demise of the U.S. dollar has been a popular in the financial media for more than a decade. That is understandable considering the creation of so many currency units over so many years. Indeed, complaining about the profligacy of the Federal Reserve is a consistent theme in our weekly posts.

The world is awash of paper currencies and bad debts – a situation that won’t end well. But for as critical as we have been about the Federal Reserve, we have said consistently that the Bank of Japan is the worst performer of the currency printing game. We have declared the Japanese Yen as the “canary in the coalmine” – essentially an indicator that the game of attempting to print wealth out of thin air may be on thin ice.

Well, the proverbial canary isn’t looking so robust. Look at a long-term chart of the Japanese Yen… 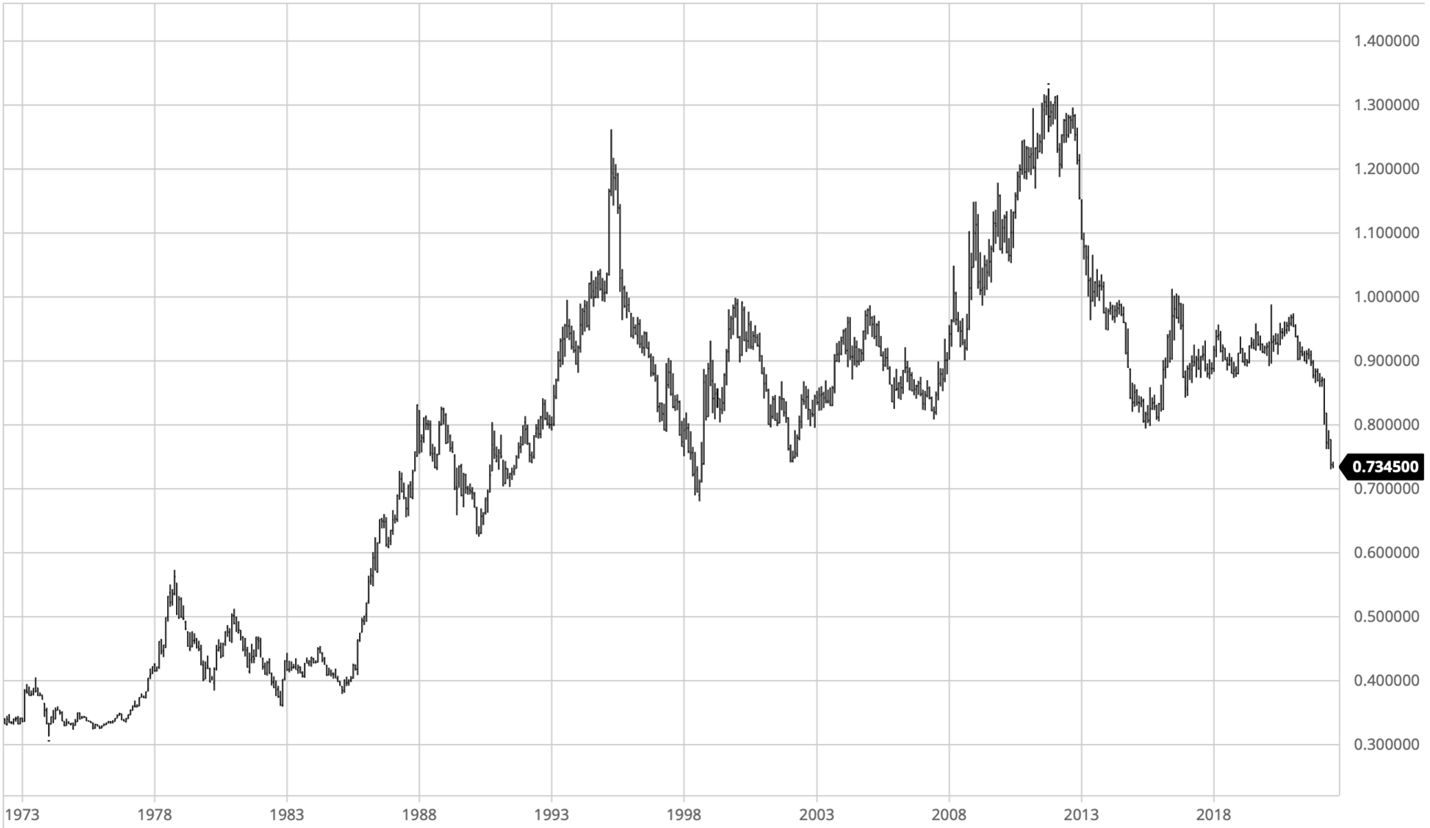 The Japanese Yen is knocking up against 25-year lows against the U.S. Dollar and the Euro and the British Pound are in a similar situation. At least some of it makes sense – The 10-year interest rate on Japanese government bonds is .25%. In the U.S., the ten-year rate on government bonds is 3.1%. Obviously, those with the wherewithal to invest in both would prefer the US bonds. The Bank of Japan is setting the price of their 10 year bond and they are buying from existing investors – and they are buying a lot of bonds. The BOJ now owns some 542 trillion Yen ($3.95 T) worth of Japanese government bonds which now comprises more than 50% of the total JGBs outstanding – which is about $8 trillion total. The sellers of all of these bonds end up with a pile of Yen and those are becoming a bit of a hot potato internationally (as evidenced by the above chart.) At the end of the day, the Japanese central bank will be able to defend the price of the bonds or the value of the Yen – but not both. Tensions are running high, and some observers wonder if the $1.3 trillion in U.S. government bonds that the BOJ owns may start getting sold off to defend the price of the Yen. The situation is getting pretty dire, and we expect there may be unintended consequences of whatever the BOJ does as they have really boxed themselves into a corner. Stay tuned.

Back home our U.S. financial markets are clearly getting supported by foreign capital coming to our shores as a safe haven. The dollar has rocketed higher vs. other currencies and alternative assets of cryptocurrencies and even gold have taken it on the chin. The fact that our asset markets are holding together very well – at least for now – is quite impressive. Past the short term, however we don’t have confidence that the higher interest rates we are seeing now will be sustainable.

Multinational corporate earnings will be adversely affected by the stronger dollar and some of the economic reports in the U.S. have drastically cooled from just a few months back.  Drastically higher interest rates in the mortgage world have put the skids on the housing market boom. Higher corporate bond rates are putting the skids on stock repurchases among other things.

This is while the Fed is trying to reduce its balance sheet of nearly $9 trillion in assets. Although the Fed’s balance sheet total has barely been reduced since their highest holdings in April, there will be a negative effect on asset markets going forward if the reduction continues. The U.S. dollar is the oil that greases the wheels of the entire world’s economy, and those wheels may start squeaking very loudly in short order. For now, our markets are holding together quite well with the Fed tightening things up a bit. Of course, that may not continue, and we do believe there will be volatility continuing forward. As always, the wildcard is the timing of the Fed loosening monetary policy to stave of adversity – it’s one thing they do know how to do.